Sewing the Sink the Pink Summer Ball 2015, a retrospective in lycra foil.

Back to lycra again and I’m not complaining. These are from way back December 2015 and the Heroes and Villains Ball for Sink the Pink. I was really into this shiny lycra foil back then it seems. That, and for some reason every look needed a cape.

Unsurprising on the capes really, the theme was Heroes and Villains so capes go with the territory. I put the dancers in super shiny metallics and pinks for this. I wasn’t that rapt with the capes and would have like a heavy fabric but budget and practicalities eventually catch up.

Fun behinds in a behind the scenes pic with Finn. Accidental photo bomb bum from Georgie Bee. I wish I could remember the conversation going on in the background on the right. The details in the background of pics, have a whole narrative of their own (9 times out of ten, there’s a bum or two, each with their own stories to tell).

I also made this leotard for Rudi. 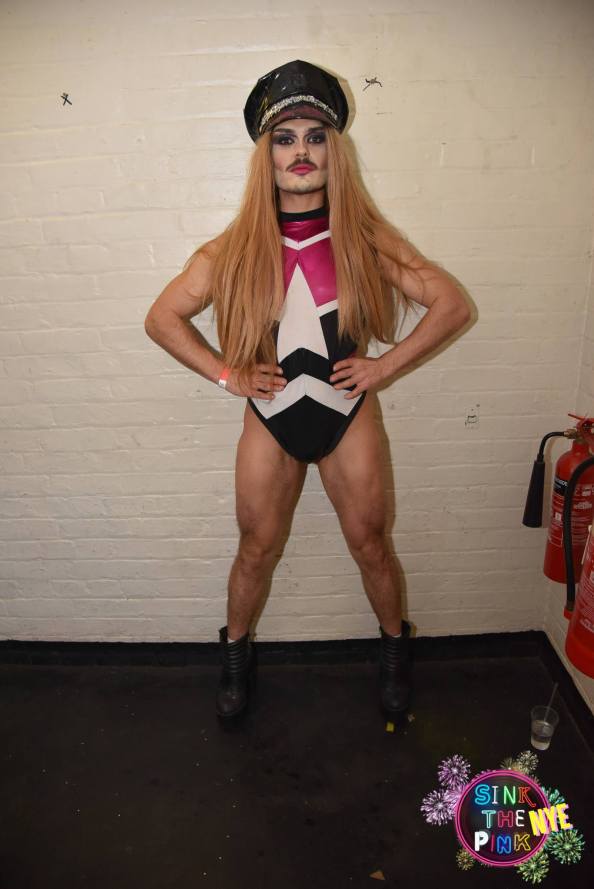 That leotard was a lot of panels but so worth it, getting those corners clean and sharp is a bit of an arse, especially with this sticky fabric. Most of the online advice I’ve seen relates to overlocking corners (two identical pieces rather than an inner and outer piece). As far as I can, I try to construct in an order that avoids this. Trying to explain what I do in words is almost impossible so I think I’ll film myself next time I do this (for my own benefit). This is the stuff that I like though, I enjoy the way my brain has to work a few steps ahead. It gets to a point that if think it through too much I can’t do it. Like when you suddenly notice you’re walking and if you actually think of the stages involved in walking, you trip and fall on your face.

Gah, looking so fresh-faced half-way through a rehearsal!

Sneaking in another look I sorted for Rudi, a modified beaded dress which I cut and turned into a leotard in Feb 2016. This was a triumph of patience and careful fussing with beads rather than any great artistry on my part. Looking at the pic, it’s also a triumph of legs really.

But back to the lycra….

This kind of lycra foil fabric can throw up problems. It’s murder on the cutter on my overlocker, it also sticks to itself and the sewing machine foot. A teflon foot helps a bit but I did this all on the overlocker so I managed to avoid that. The main issue though is the print rubs away. It dissolves in the wash, it dissolves when it gets sweaty, it rubs off (between thighs etc). It may just be the unavoidable nature of the fabric because I’ve had such mixed results from the same sources. Sometimes it last, sometimes it fades away. It really kicks my arse though, especially after all that work. It even gets a bit transparent, which is kind of fun but only if it’s intentional.

We shine but briefly, I guess. Unless we want to stay unwashed and find a way to stop sweating. Or find a better fabric supplier…open to any and all suggestions!

Sewing and assorted nonsense. For reasons that escape me, I left the sunshine and beaches of Australia for the crisps and glitter of London in 2001. I now live in the middle of some kind of feline drop-in centre in East London battling for space to make costumes and clothes. Over on twitter and instagram as @smittenness Email over here ------> smittenness@gmail.com
View all posts by Vanessa →
This entry was posted in Costumes, Sink the Pink. Bookmark the permalink.

2 Responses to Sewing the Sink the Pink Summer Ball 2015, a retrospective in lycra foil.

Sharing my adventures in diary reading and writing....

A group of North Texas cosplayers

Iconic photos of a changing city, and commentary on our Collections & Exhibitions from the crew at MCNY.org

is blogless no more!

The Diverse Creative Exploits of a Small Soprano

Putting my teenage diaries online is a pretty daft idea but I can't quite bring myself to chuck them on a bonfire after years of writing EVERYTHING down... with diagrams.

Sharing the highs and lows of learning to sew